The SOLAS (Safety Of Life At Sea) Convention is an international treaty responsible for ensuring the safety of merchant ships.

The Global Maritime Distress and Safety System (GMDSS) forms Chapter IV of the SOLAS Convention and was introduced in stages between 1993 and 1 February 1999. Its creation marked the biggest change to maritime communications since the invention of radio.

The GMDSS Handbook, produced by the IMO defines GMDSS as follows

The basic concept of GMDSS is that search and rescue authorities ashore, as well as shipping in the immediate vicinity of the ship in distress, will be rapidly alerted to a distress incident so that they can assist in a co-ordinated SAR operation with the minimum delay. The system also provides for agency and safety communications and the promulgation of Maritime Safety Information (MSI) - navigational and meteorological warnings and forecasts and other urgent safety information to ships. In other words, every ship is able, irrespective of the area in which it operates, to perform those communication functions which are essential for the safety of the ship itself and of other ships operating in the same area. 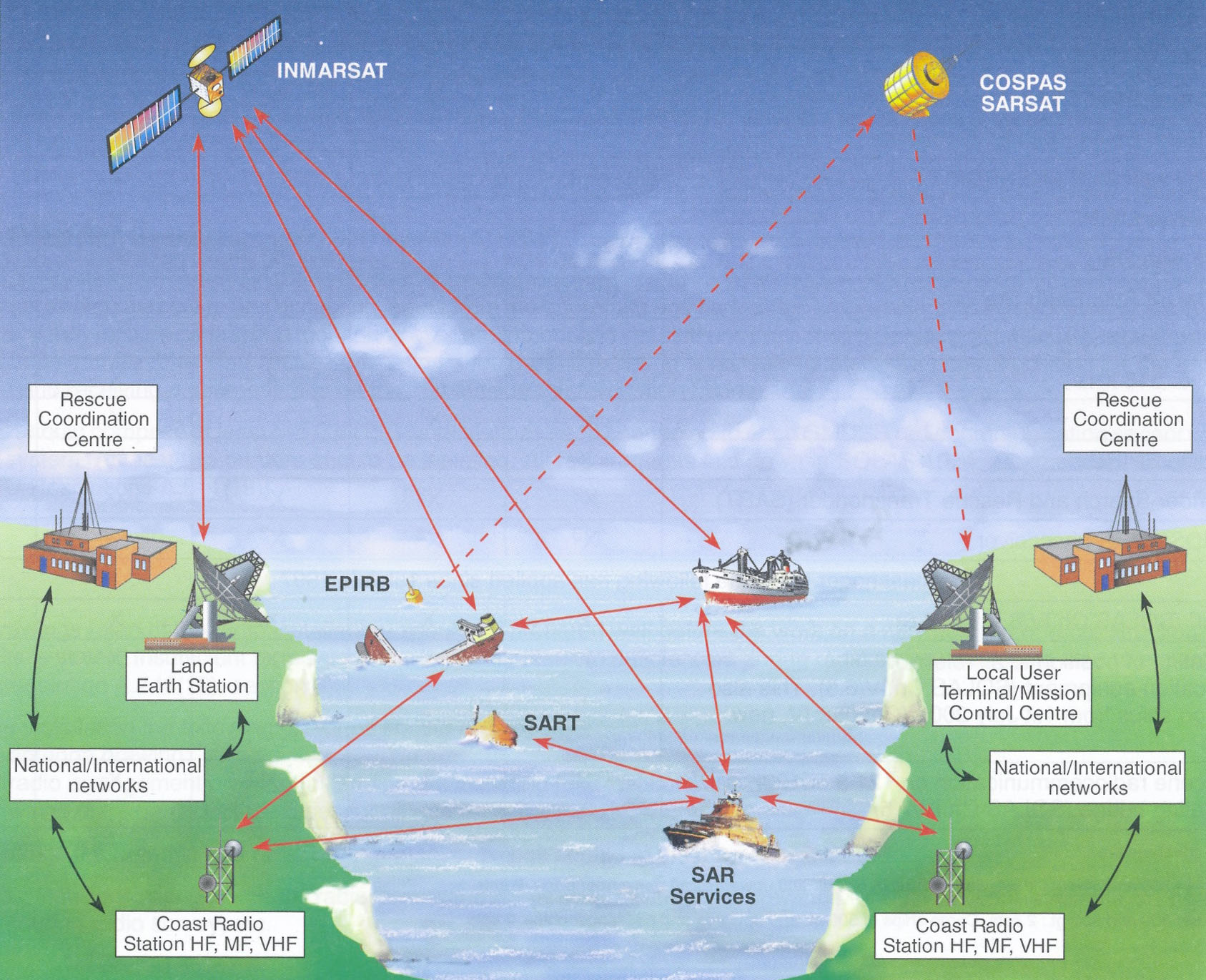 GMDSS consists of several different safety systems based around different communications technologies. These include DSC, NAVTEX and INMARSAT. Click the picture to enlarge.

Full operation of the Global Maritime Distress and Safety System (GMDSS) is planned for February 1st 1999. Under IMO legislation, all passenger vessels had to be fitted with the necessary equipment by 1995, and all vessels over 300grt to be GMDSS equipped by the 1st February deadline. National administrations are also being encouraged to provide the necessary shore based infrastructure in sufficient time.

Under the GMDSS, all Distress and Safety communication will be automated and watch keeping on traditional voice and Morse code frequencies become history. At the press of a button, a ship can send its identity, position and nature of distress by either satellite or terrestrial communication. It will then be up to a shore based Rescue Co-ordination Centre (RCC) to alert vessels in the area to go to the aid of the casualty. This co-ordinating role of the RCC is a new one. Under the SOLAS 1974 system, ships in the area were required to monitor for distress alerts and then respond directly. The GMDSS now makes this the responsibility of the RCC.

GMDSS also changes the nature of Routine and Safety Radio operation. These become fully automatic, enabling ship’s officers with a General Operator’s Certificate (GOC) to deal with all incoming and outgoing ship’s radio communication. It will no longer be necessary to sail with a specialist radio officer.

It is extremely important that both ship borne and land based equipment is easy to operate. International specifications for GMDSS have sadly neglected this important aspect. At ICS Electronics Ltd. we have consistently listened to the needs of the operator, and confidently claim our GMDSS equipment is the easiest to use in the world. This saves on training costs and the time required to become familiar with the equipment.

Other internet sites with more information on GMDSS are listed on our links page.

While Digital Selective Calling (DSC) is one of the most important parts of GMDSS, it is the last to be fully implemented. DSC provides a means of automating all day-to-day marine terrestrial calling - making marine radio as easy to use as a telephone. DSC effectively provides the operator with a digital dialling system capable of ringing an alarm at a distant radio station when a call is addressed to that station.

Like a telephone, you do not need to know how the call has been routed or even the frequency or channel being used. All you need is a means of alerting the other party by calling their number, and then a means of talking to them. Under GMDSS, all vessels are allocated a unique Maritime Mobile Service Identity (MMSI), which is a unique nine digit code. The digital calling information is transmitted on specially designated channels. In the case of a VHF radio, this is Channel 70. Channel 70 is dedicated for DSC use and must under no circumstances be used for anything else.

An added benefit of DSC is that the digital dialling signal can also carry other information, such as your vessel’s identity, position and the nature of the call as well as information specifying the channel upon which subsequent communication should take place. The entire message is transmitted in one quick burst, thus reducing the demand time on the calling channel.

In a distress situation, all necessary information can be sent automatically at the touch of a single button. The vessel’s position can be determined from a GPS navigation receiver connected to the radio or entered manually. Its identity is permanently coded into the radio in the form of the allocated vessels MMSI number. The nature of distress can also be selected by the operator if there is time to do so.

Using digital coding, DSC automates all the radio functions with which existing marine operators are familiar. It also relieves the person at the other end from the tedious task of manual watch keeping. All the old familiar functions are still in place, but they now have English names and are accessible at the touch of a button.

NAVTEX is a system for the broadcast and automatic reception of maritime safety information by means of a narrow-band direct-printing telegraphy. NAVTEX provides shipping with navigational and meteorological warnings and urgent information through automatic printouts from a dedicated receiver.

NAVTEX is a component of the IMO/IHO Worldwide Navigational Warning Service (WWNWS) defined by IMO Assembly resolution A.706(17). It has also been included as an element of the Global Maritime Distress and Safety System (GMDSS). Since 1 August 1993, NAVTEX receiving capability has become part of the mandatory equipment which is required to be carried in certain vessels under the provisions of the International Convention for the Safety of Life at Sea (SOLAS).

How does it work?

NAVTEX transmissions are sent via a single frequency from localized stations situated worldwide. The power of each transmission is regulated so as to avoid the possibility of interference between transmitters. Users can set their NAVTEX receivers to receive specific message types and reject others. Messages such as navigational and meteorological warnings and search and rescue information are non-rejectable to ensure that ships equipped with NAVTEX always receive the most vital information. Users can choose to receive information from the single transmitter that serves the sea area around their position, or from a number of transmitters.

NAVTEX messages are transmitted worldwide from local stations, the number of stations grows month by month. Information about all known NAVTEX stations can be found in our NAVTEX Database which provides , details including name, position, range, and operational status.

What is an MMSI

Under GMDSS every vessel has its own unique Maritime Mobile Service Identity (MMSI). An MMSI is composed of nine digits. A vessel's MMSI is built into the DSC equipment and is not user-changeable. If a DSC unit is moved to another vessel, or the vessel is sold, a technician must re-program the MMSI.

The Maritime mobile Access & Retrieval System, maintained by the International Telecommunication Union is a searchable database which can be used to identify a vessel or coast stations MMSI number. The database is updated on a weekly basis.